Recently I discovered a web site that is really cool. It is called AmericanRadioHistory.com. I was reading the 1970 issue of Electronics Installation & Servicing Handbook when I stumbled onto this color code chart that I thought I would share. 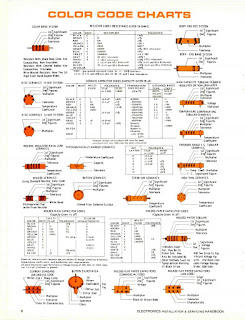 Go to page six and you will find a Color Code Chart. I printed a copy to put in a binder that I keep in my lab called Construction Techniques. The older I get the more I tend to forget things and the binder is a great way to keep important information at my finger tips.

Thanks to the rain yesterday, by the time I made it out to my mailbox, my paper copy of the Journal of Power Management was wet. Immediately I tried to pull apart carefully the pages before they got stuck. I ended up pulling out both staples and scattered each page around my living room to dry. This morning, as I was puting the dry journal back together, I noticed on page two the following:

"To reduce paper use, Power by Linear Journal is going digital and will no longer be regularly delivered as a printed publication. To ensure that you receive electronic delivery of the latest Journal to your email inbox, check your MyAnalog account. Make sure you have checked "Power by Linear" under the "Resources > Newsletters" in the settings for your account."

Go to www.analog.com to update your free subscription. 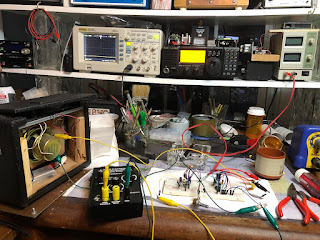 During the month of November I stumbled onto a Youtube channel run by Charlie Morris ZL2CTM. I was immediately impressed with Charlie's build philosophy: plan your circuit, consult datasheets, do the math, build and test!

Towards the end of Spring 2018, I got the bright idea of building a rig from scratch and making it a summer project. But I quickly got bogged down in the design phase of my project. I never made it past the local oscillator! :)

Thanks to Charlie's excellent teaching skills, I now have a road map that I can follow on future projects. Head over to Charlie's channel and see what he is up to.

Right now I am five stages behind on his "Homebrew MC1350P based SSB Rig" and my next step is to build the RF Amplifier stage. But before I do that I am thinking about building the "8640-Jr Test Oscillator" that I never got around to building in the Fall of 2015.

This year at the Dayton Hamvention 2012 gathering I decided to buy myself a new soldering iron. I read reviews of the Hakko 888 throughout the year and I decided that if I found one at the Hamvention I would buy it! I was pleasantly suprised to discover that B&D Enterprises had Hakko soldering equipment for sale. Without hesitation I plopped down $105 and walked away with a Hakko FX888 soldering iron and five extra soldering iron tips.

This soldering iron replaced my old faithful Weller WES51 soldering station. I like the Hakko FX888 even better and I look forward to using it for many years to come. 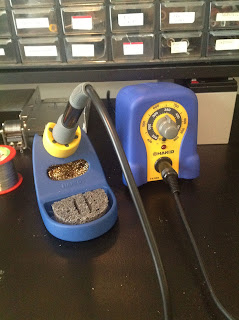 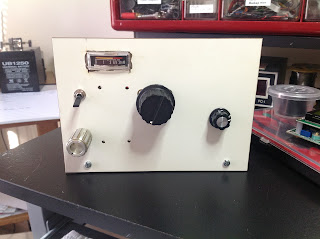 I searched my archives for a suitable S-Meter circuit and it turns out that I had one in my Project Box. I have a Project Box that I keep kits in for future needs. One of the kits that I had was the Kanga Products "Audio 'S' Meter." The box was down in my basement and I had completely forgotten about it.

According to Kanga Products,
"Most homebrew receivers and transceivers lack any form of 'S' meter. They are not difficult to build but finding a suitable circuit that works is often a problem. This circuit is based loosely upon one from Doug DeMaw W1FB. The circuit samples the audio of the receiver after the detector, but before the audio volume control. The signal is amplified and rectified to give a DC voltage that varies according to the level of audio."

The enclosure style I have chosen for my receiver is to allow me to easily modify my circuitry until I have locked down my choices for performance and usability. I simply used a block of wood and a piece of artist board that has clay in it to build the reciever chassis. As you can see from the front of my receiver the design is constantly evolving. Do you see the 4 holes in a rectangle shape? I was going to mount the S-Meter circuit there but the spacing was a little too tight and it was interfering with the main tuning capacitor. So I decided to mount the main receiver board vertically and then attach the S-Meter board to one corner of the receiver board. 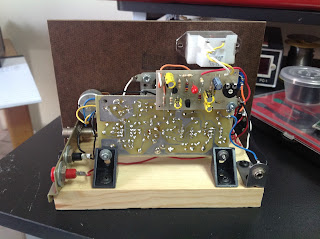 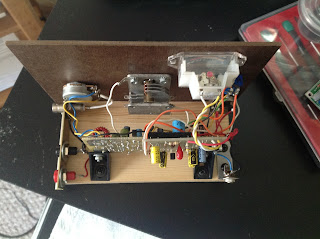 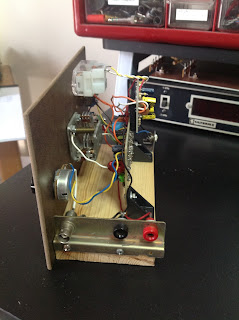 The next modification I want to make to my 40 Meter receiver is to add a digital frequency dial.

The first thing that I noticed was that I had my RF gain and Audio gain controls wired backwards. After I fixed that I noticed that the receiver had a real bad drift problem. I immediately asked for some help finding some new capacitors on the QRP-L mail list. Steve Smith, WB6TNL  came to my rescue with some nice NP0 capacitors for C2, C4, C5, C6, and C8. C8 evidently was the worst offender because as soon as I replaced that capacitor the frequency drift improved immediately! Before I replaced C8, the radio was just about useless. Now I can go make a cup of coffee and the radio is still on frequency when I get back to the shack. :) 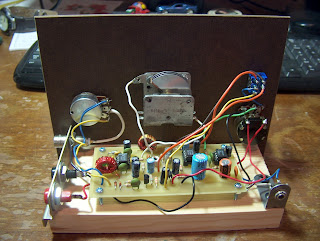 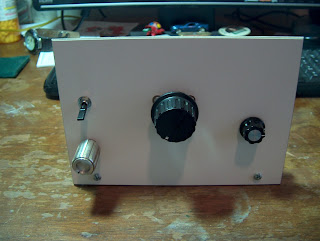 Now I want to add some modifications to this receiver: a S-meter and a digital display. I will update my blog when those modications are complete. 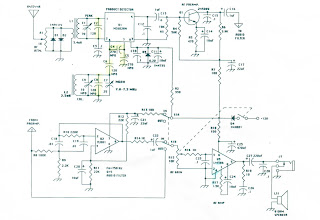 Today I received a cookie tin filled with brownies from a friend of mine at work. As soon as I saw the container I immediately said to myself that "it would work great for a QRP project!" So here is a picture of the cookie tin. I am looking for a way to remove the paint from the tin box. 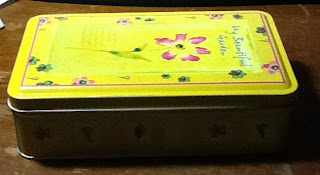